We are about to witness the world’s next paradigm shift! For those of you who are thinking, “Huh?”, allow me to share the excitement. Humanity has gone through enough of these to see a pattern in how we share information. The first, was verbal language. People used storytelling to share history and communicate. Next, the world’s dominant species could comprehend written language. Record keeping and accurate messages were shared among civilizations around the globe. 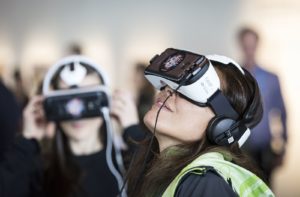 It took some time for another paradigm shift to occur. The medium that changed modern history as we know it was the printing press. Knowledge, news, and entertainment could be shared amongst ourselves on a much bigger scale. This sped up the evolution of how people communicated and socialized forever. I feel compelled to mention the telephone and computer, but I would argue the internet was the real-world changer.  For the first time, ever, people could share information and communicate across the globe instantaneously. Not to mention, live stream our favorite shows on Netflix can happily take up our entire weekends.

The next wave of technological advancements accepted into society will be virtual reality. Not those optical illusions by using glass and mirrors that the 80s and 90s arcades teased us with. We can already see glasses being advertised that use cell phones to create the virtual world. This might not seem all that important, but think about it. Like Robocop; glasses, contact lenses, car windshields (some already do this) will scan the environment and project digital screens or popups about what we are looking at. This is termed augmented reality which means reality layered with digital ones. Picture this, your glasses bring up a digital version of your cell phone that seems to float in mid-air right in front of you. Like the Wii or Kinect, you reach out in front and press the buttons of your floating digital cell phone. By using augmented reality, we really wouldn’t even need physical phones anymore. 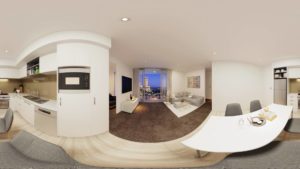 There are so many opportunities with virtual reality it is almost mind boggling. Instead of sharing data over the internet, we will share experiences and feelings. You will be able to record yourself scuba diving in Cozumel and let others immerse themselves in the very 360-degree memory you captured on the device. Many of this technology is already invented, but only just now can you notice these items being marketed to consumers. Get ready world, because if we thought the past decade was a wild ride, I fear the next ten years will surprise us even more.